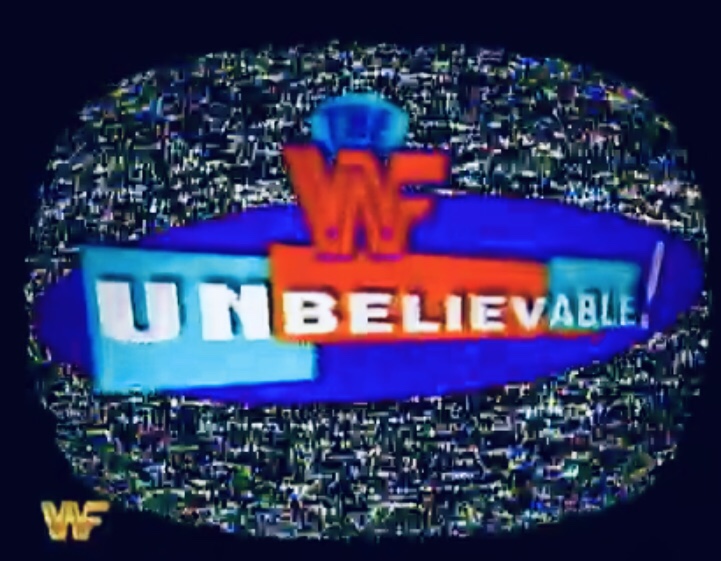 Fun fact I didn’t realize before I started this blog that WCW actually had a lot more PPV’s than WWF during this time. Which at first might seem odd until you realize WCW at the time drew less people for a house show than a current reunion tour featuring LMFAO- who were the wrestling equivalent of PN News being mashed up with Erick Watts . (LMFAO’s father was Barry Gordy- hence their David Flair status). So for this latest installment of Why Are You Booing Me? we venture over to cable tv, and the home of Monday Night Raw the USA network! If you are wondering about the USA network at this time they are best known as the station of Silk Stalkings, the Westminster Dog Show, and Dance Party USA- the precursor of the MTV Grind, but featuring dubs and the rejects of Degrassi High casting. 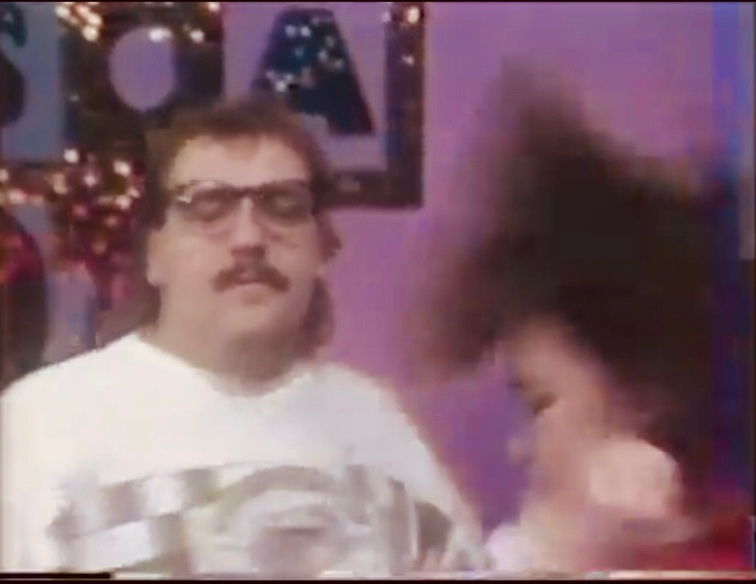 Vince and Bobby the Brain are the announcing crew, with Bobby sporting a Monday Night Raw windbreaker that I am pretty sure should have been standard issue Dipset attire in 2005. 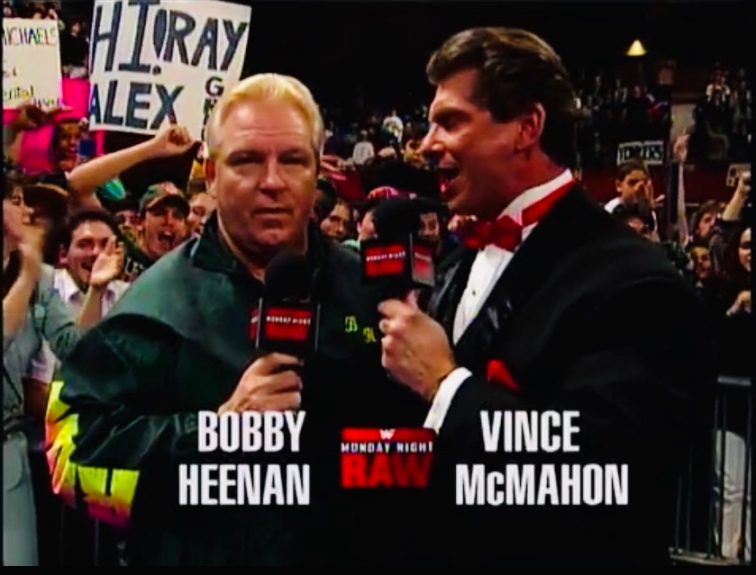 The Steiner Brahs are out first against Mike Khory and Reno Riggins. Reno channels Adam Cole with a we going to win baby boast to to the crowd. Things that are not happening in this match- Reno Riggins winning baby. Steiner Brahs work stiff as you can see Riggins rethinking his early confidence as Rick Steiner decides to snatch him up, and throw him upside down dick first into the top turnbuckle. Speaking of shellackings and dicks we have Heenan dropping this topical gem telling Vince, 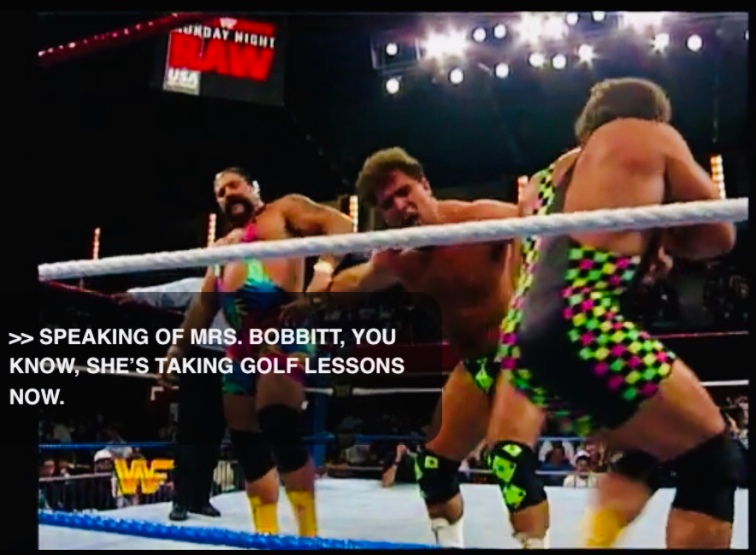 “Well she doesn’t have to worry about her slice, but putting, her putter needs work. Also known as the long drive.” I am pretty sure Vince liked this joke so much he used it as influence for when Kaientai tried to cut off Val Venis’ dick- which has me pondering if time is a flat circle in the wrestling ring. Shelton Benjamin feels me on this one. 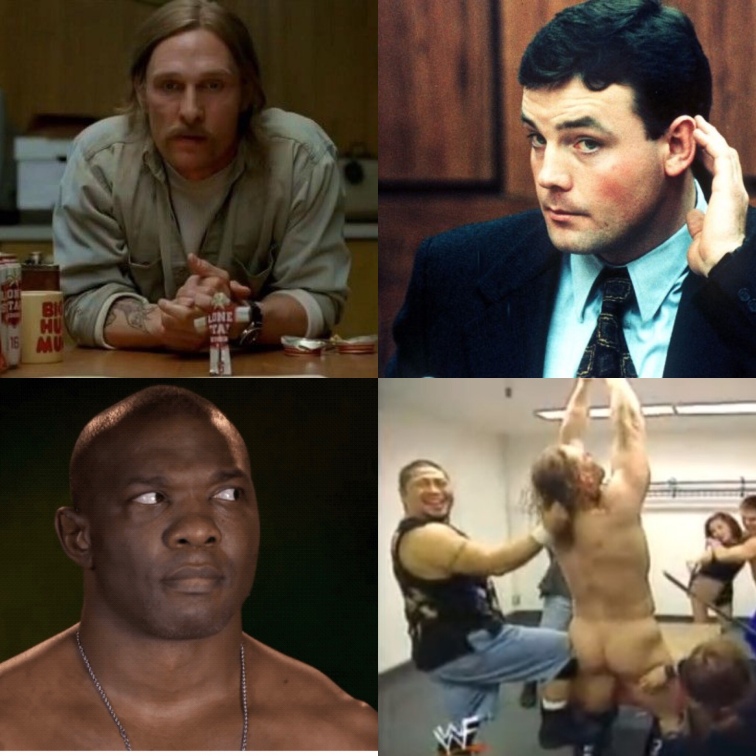 Before I get too deep in thought Scotty nails a Frankensteiner for the win baby!

Next up we have a Double J Jeff Jarrett vignette in Nashville. Jarrett comes out with the drip rocking a red outfit complete with a cowboy hat with a scarf, and a bolo tie looking like inspiration for Lil Nas X’s “Old Town Road.” 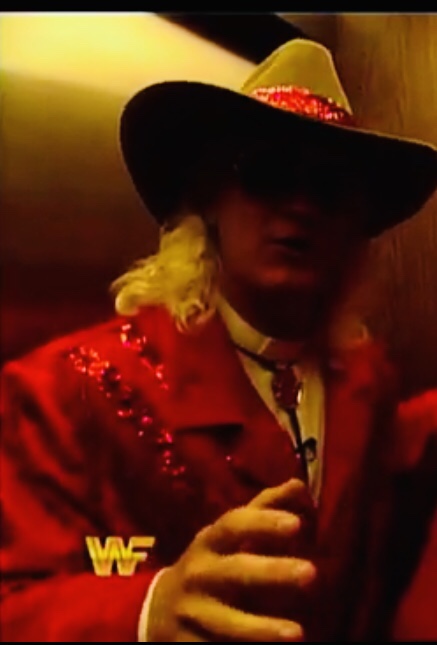 The Outsiders collide with Diesel taking on Razor Roman in a non-title Intercontinental Tile match. If this was modern day Raw this would be code for the challenger will be pinning the champion. Razor chants bellow in the war zone as the big man, and the medium sized man perform a test of strength. Diesel works over the back hitting a sidewalk slam, and dominates early. Razor comes back and hits super awkward looking bulldog from the rope. Shawn Michaels runs in from the back, and hits a super kick to the mush of Billi Eilishe’s favorite wrestler, the Bad Guy, for the disqualification. Michaels continues to put the boots to Razor after the bell, and attempts to pile-drive him onto the belt. He is thwarted when the 123 Kid comes to the rescue with a body press off the top rope, and Diesel and Michaels retreat to the back.

Bam Bam Bigelow with the luscious Luna Vachon is out next against John Crystal.

Typical squash match with the highlight being when The Brain compares Crystal to Leon Lett by calling him one of the best rasslin’ insults in the business- a ham and egger.

A Doink promo about Christmas follows to further his feud with the beast from the east.

Vince is out in a tux to present the 1993 Superstar of the Year! The Brain is sure he is going to win as Vince announces voting came down to a close vote between two superstars, and introduces the runner up- Lex Luger. Bobby continues to shrill that he is the superstar of the year as Luger thanks the fans dressed in a Fox and Friends wet dream outfit.

Luger is out to introduce the winner and worst older brother of the year Bret Hart. Bobby is pissed claiming somebody stuffed the ballot box. Bret tells the crowd that straight from the heart that this is most important thing in my life because the fans never stopped believing in him, and promises to win back the title. He dedicates the trophy to the fans who never gave up on him, his friends, and family. As he celebrates we have a replay of The Hitman costing Owen the Survivor Series match, and the infamous Helen Hart they are going to repossess my teeth face.

Owen is up next rocking the hitman glasses as he is booed by some cowards in the crowd. He does the sunglasses bit to a female fan in the front row who has wandered to the arena straight from The Dance Party USA set. He is going against Chris Dudley, a hypercolor Jerry lawler who doesn’t understand where the hard camera is. 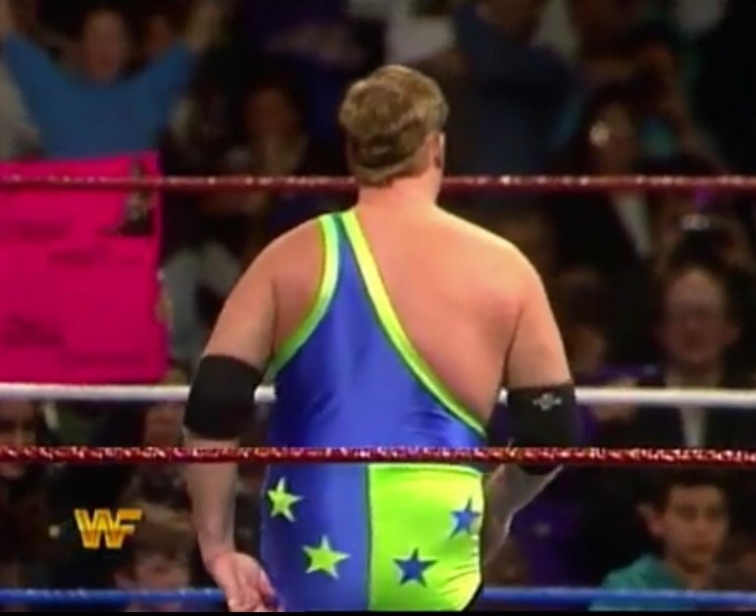 The cowards in the crowd chant we want Brett. Owen nails a beautiful enziguri kick to the back of Dudley’s skull, and follows up with a sensational slingshot body press outside of the ring. The Rocket continues the assault with a beautiful middle rope drop kick to Dudley, and easily wins with a sharpshooter. After the match Heenan attempts to interview Owen about the Survivor Series but Owen refuses to answer.

Bootleg Brock Lesnar Ludvig Borga is our final match as he takes on Scott Taylor. 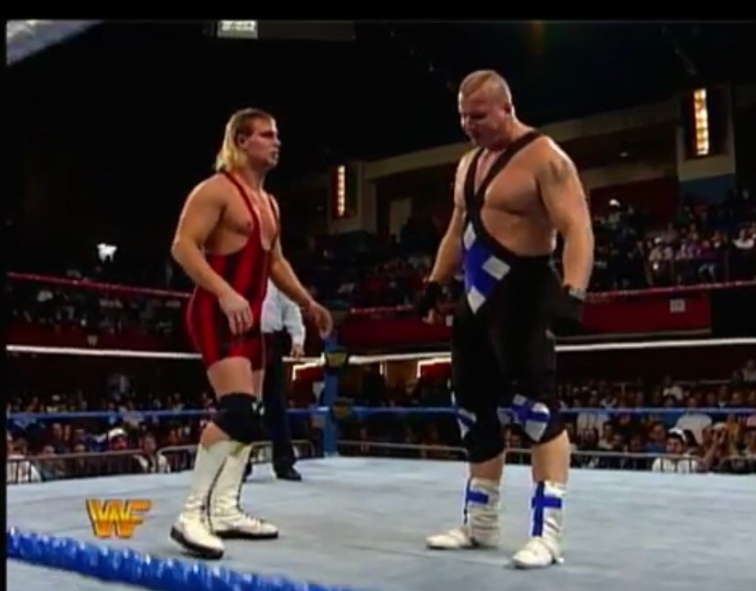 And if you are wondering why this jobber looks so familiar it’s because it’s none other than worm enthusiast Scotty 2 Hottie of 2 Cool.

Borga wins a boring match with the torture rack, which is fitting for the fans feel like they are being water boarded every time he wrestles. With that our foray into basic cable is over. Next up for the WWF we head into 1994 and the Royal Rumble where Luger and Hart collide in the rumble, and Yokozuna battles the Undertaker in a casket match.