Live from Houston, Texas we have WCW’s Fall Brawl featuring one of my favorite gimmick matches of all time War Games! Tony Schivane and Jessie Ventura welcome us on the play by play; with a solo Eric Bischoff on hosting duties. Schivane is plastered in make-up looking like Teddy Perkins, and The Body is the frontman from Judas Priest.

Michael Buffer opens the show introducing a fantastic opening match between Lord Steven Regal and Ricky “The Dragon” Steamboat for the TV title. Steamboat’s ribs are taped up after a Regal umbrella beat down on WCW Saturday Night the day before. Steamboat comes down to the ring dressed like a dragon and spitting fire in an attempt to woo Daenerys Targaryen. 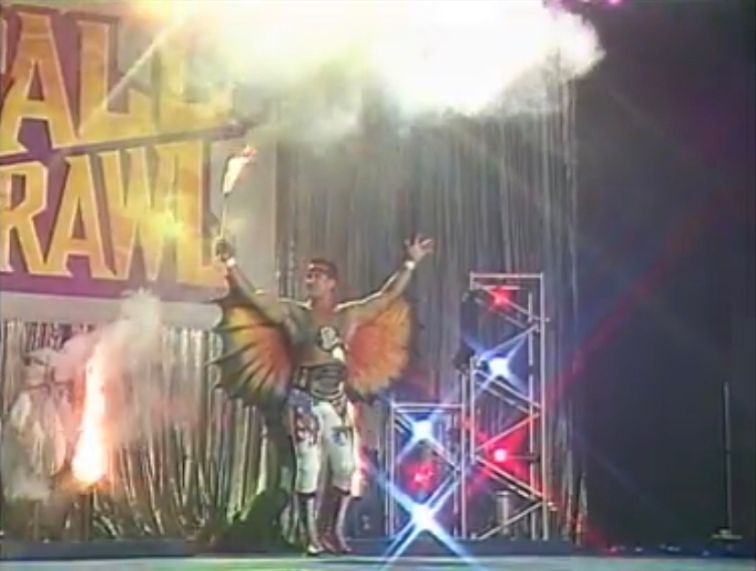 While Regal is with his entrusted manager Lord Varys aka Sir William. The match starts with the two mat technicians surprisingly brawling, and exchanging stiff chops and upper cuts. Steamboat blatantly throws Regal over the top rope with Regal landing on the raised entranceway. Steamboat is not disqualified for this, and Ventura is rightfully outraged at this blatant disrespect of the rules. The coward Schivane shills that he never “hit” the floor. So basically Regal was like Kofi Kingston in the Royal Rumble. A surprising Steamboat sucks breaks out from the crowd that I assume is upset at his utter disrespect for the rules.

The match finally gets back to its technical roots with Regal working over the ribs, and breaking Steamboat down with punishing stretches, and pointed blows to the taped up ribs. Steamboat fights back and goes to the air with a flying body press that smacks Regal down, but Steamboat is unable up to make a solid cover after the previous beat down to his ribs. Regal throws Steamboat over the ropes, and smartly distracts the ref to hide his nefarious tactics. Steamboat is able to skin the cat, but for his athletic prowess Sir William nails him with the umbrella knocking him out. Regal takes this advantage to get the pin and become the new television champion.

Big Sky, Chris Jericho’s Canadien uncle, is out next.

Next up we have Paul Orndorff, and his tag-team partner the future Wal-Mart fitness trainer The Equalizer (aka the soon to be Dave Sullivan). I never knew Wal-Mart had fitness trainers, but Kevin Sullivan’s dyslexic brother and future Hulkamania stan seems like an ideal choice.

They are facing off against the ebony and ivory dancing divas of Buff Bagwell and 2 Cold Scorpio. Buff Bagwell’s go to dance is the hip thrust which is great foreshadowing for his current profession as a male escort.

http://old.cowboys4angels.com/cowboy/marcus-bagwell/. The match starts with the Paula chants, and early domination by the Wonderful Equalizers(my WCW 94 nickname for the two). Per usual Ventura is the voice of reason pointing out the ref’s inability to keep control of the match by counting pin attempts when both Bagwell and Scorpio are in the ring. The coward Schivane covers for the supposed good guys by saying that breaking the rules is ok. This horrible referring leads to chaos as a four man brawl ensues with Orndorff missing a running knee on Bagwell, and blasting The Equalizer instead. Scorpio hits the 450 splash the win. Before the hydrox divas can celebrate the win the Wonderful Equalizers beat them down. 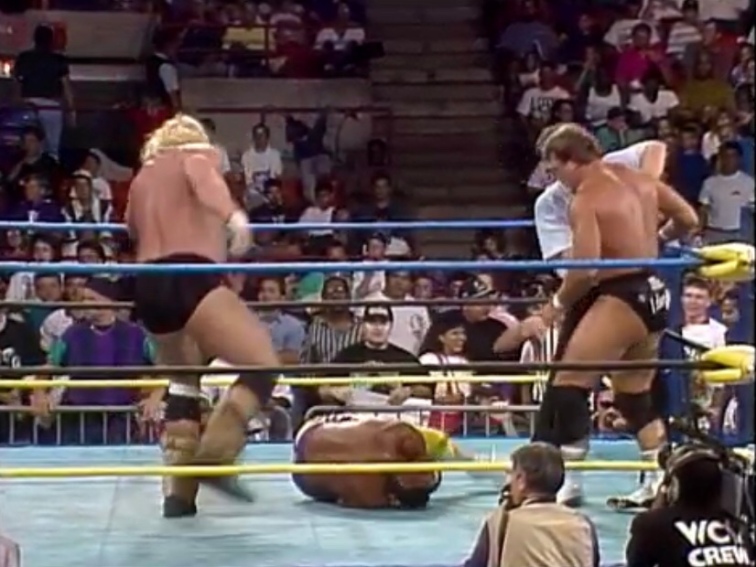 The future naked Mideon, Shanghai Pierce with Tex Schlesinger, is battling Ice Train next. Shanghai is the heel so of course the camera focuses on on this sign:

Missy Hyatt is off hosting duties and now managing the Nasty Boys. A good friend I grew up with(and one of the 63 people who read this so this- so here is my cheap pop to keep him reading) reminded me I use to love the Nasty Boys- I blame Missy Hyatt for this in hindsight. Ventura is also a big Missy Hyatt fan as the camera catches him in mid leer. 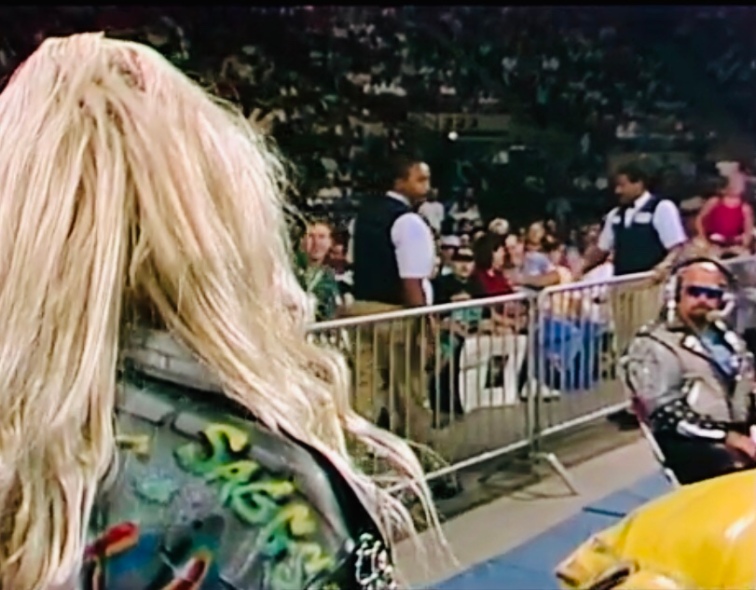 The cameraman follows that up with this fellow:

Things this fellow didn’t buy braces. And things I don’t buy Michael Buffer’s introduction of Paul Roma as becoming one of the most popular wrestlers in WCW.

This match is as disappointing as Roma’s reign as a horsemen. I will practice benevolence and just tell you the Nasty Boys win in 24 minutes. Check notes- yes 24 goddamn minutes- to become the new tag team champions. If you want to have a reference for how long a 24 minute match is not one of the title matches at this past Wrestlemania went 24 minutes. In fact the longest match of the night was HHH and Batista clocking in at, yep, 24 minutes. 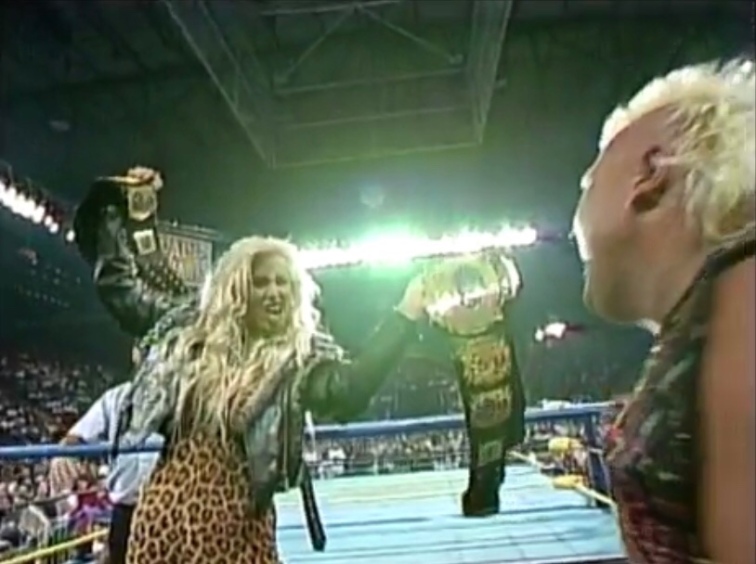 Next up is this week in racist tropes featuring Yoshi Kwan.

If you couldn’t tell by the painted on eyebrows, white skin, and failed attempt at Fu-Manchu facial hair this is a white guy from Florida named Chris Champion. 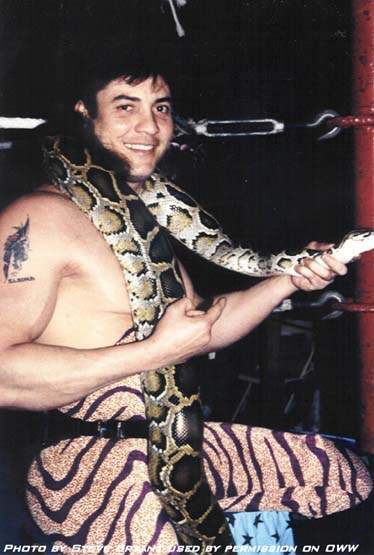 He was a wrestler trained by the Malenkos, and would go to to train both Lex Luger, and Ron Simmons. He was also in a time traveling tag team called the New Breed. They were from the year 2002 when Dusty Rhodes was the President of the United States. AKA the only president I would vote for other than Eric B. Champion wrestled mostly in the southern NWA territories, and had a short run in WCW managed by Harley Race in a feud against Cactus Jack in one of the most early 90’s WCW angles possible. This was the infamous Cactus Jack is a homeless amnesiac sailor lost in Cleveland. This is in the WrestleCrap hall of fame for good reason. Cactus Jack was battling Vader- these were two of the most brutal wrestlers of the time- and WCW thought that a homeless Cactus Jack angle was the best to push this feud forward. After some promos of Jack lost in Ohio, and a weird reporter who loved to follow him around, it was abruptly dropped as a ruse for Cactus Jack to get in the head of Vader. Also Harley Race has a little bag that Cactus Jack is supposedly obsessed with. Insert this joke with some good old fashion racist tropes sprinkled in

The match is mercifully short, and Yoshi Kwan proves he is the king of soft style with some awful kicks. Cactus Jack wins easily with a double arm ddt. He wins back the bag, and sets up one of the best Texas Death matches of all time between Vader and Jack. So technically this was all worth it for that match- but they just get there in the most WCW way possible.

Following this is the NWA title match pitting the champ Ric Flair versus Ravishing Rick Rude. Big match feel with Michael Buffer on the introductions. Rude has his usual fantastic tights with Fifi the Maid air brushed on them. Fifi the Maid was Flair’s maid and escort to the ring. A fun fact: Almost 25 years later in 2018 she would make on honest man out of the Nature Boy and marry him. Before the match Rude kisses Fife the Maid in a timeline where me too didn’t exist. The match is solid but unspectacular, and I fear my hopes going into this match were too high. What commences is a prodding, and slow back and forth match. Flair focuses in on Rude’s arms the first half of the match which was a difference tactic considering he usually works over the legs to set up the figure four. Great spot where Flair does a flying body splash to Rude to send him over the top rope. The match drags a bit and comes to a halt when Rude puts a bear hug on Flair for what seemed like the length of of how long the Giant’s are going to be clowned for drafting their own Paul Roma – Daniel Jones.

Flair and Rude go back and forth with Flair gaining back control and hitting a nice axe handle smash from the top rope to Rude on the outside. Rude returns the favor with a flying fist to the Nature Boy’s noggin. With Flair down- Rude commits sexual assault after Fifi slapped him by forcing her to make out with him, and then threatening to punch her in the face for trying to slap him in defense after his unwarranted advances. With the ref distracted by sexual assault and caring for Fifi; Flair puts on the figure four and is thwarted when Rude digs into the tights to grab a foreign object to knock out Flair and win the title.

Remember when I said War Games is one of my favorite gimmick matches of all time- let’s just say this is unfortunately one of the worst ones that ever happened. Vader leads one team with Sid Viscious, and Harlem Heat when they were Kole and Kane. They are facing Sting, Dustin Rhodes, British Bulldog, and the Botchamania mascot the ShockMaster. They are led by honorary captain Road Warrior Animal, who wanted to start the match with ShockMaster because he hates good wrestling. Dustin sneaks in instead go start the match even though he is harboring hurt ribs from a Vader attack on WCW Saturday Night. I honestly am so disappointed with rest of the match I am fast forwarding to the end. In eight minutes less time than the tag match championship match Animal’s squad wins and ruins my childhood memories of this match. The match is won with a fucking bear hug by the ShockMaster. I refuse to write anymore and leave you with this pic of the finish- a goddamn bear hug by the ShockMaster on the five time, five time, five time, five time, five time WCW world champion who spits hot fire like a dragon from Game of Thrones.